2019 Awards for Excellence in Land Conservation

We are proud to celebrate and feature our winners for our annual Awards for Excellence in Land Conservation. In making these awards, CLCC seeks to recognize organizations and individuals who have made a substantive contribution to the ongoing success of land conservation in our state and projects that may serve as a guide to or be replicable by other land trusts and conservation organizations in Connecticut.

Among its many projects, the Heritage Land Preservation Trust has been actively involved in preserving the historic Brass Mill Dam site at the junction of Migeon Avenue and Church Street on the West Branch of the Naugatuck River in the City of Torrington.

The site consists of 12 acres along both sides of the Naugatuck River and includes the dam itself, a gate house and what can only be described as a gorgeous sluiceway. Extensive work has been done on the grounds through the Trust's efforts, including clearing the area of invasive brush and creating a park and benches on the eastern side.

The Trust is now in the process of applying for grant money to restore the gate house that still stands on the west side of the river.

The work done to preserve the land is certainly impressive. In addition, this project has special significance in its preservation of the historical value that the land represents—reflecting the manufacturing history of the City of Torrington and the importance of the rivers and essential water power they supplied to the factories and mills. Originally only a log dam, the structure was rebuilt in the 20th century and is now made of stone. It is arguably the best example of a mill site in the city.

The value of this project is already being recognized at the highest levels of the City of Torrington. Last summer, members of the Trust held an "open house" at the site for the public to view their work. The mayor, Elinor Carbone, and the director of the Historical Society, Mark McEachern, as well as members of the Trust, all spoke about the benefits of this project to the community.

In addition, the Torrington Trails Network, in partnership with the City of Torrington, is in the process of building its section of the Naugatuck River Greenway, which will eventually extend 44 miles south to Derby. The northern terminus of the Greenway will be on Franklin Avenue in the downtown area, approximately three quarters of a mile from the dam site.

The Network plans to extend the city's trail system from that terminus to the site that the Trust is improving. The site will additionally become a key landmark in the trail system.

Through this project, the Heritage Land Preservation Trust has done an outstanding job enhancing a site that preserves open space, provides public use, and restores an important historical location for the City of Torrington’s residents and trail users. 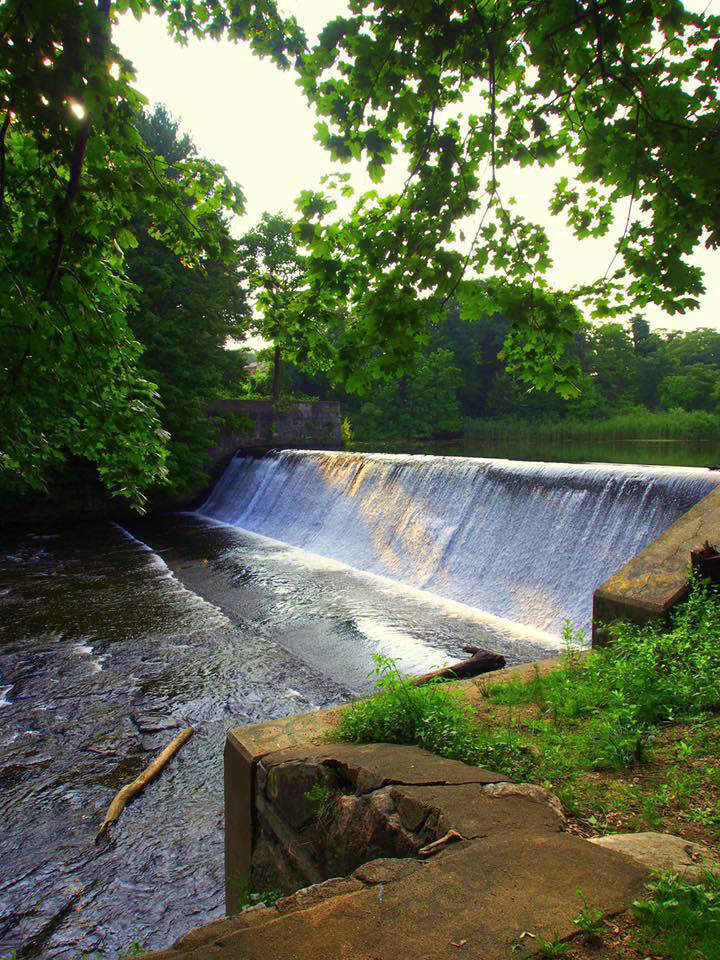 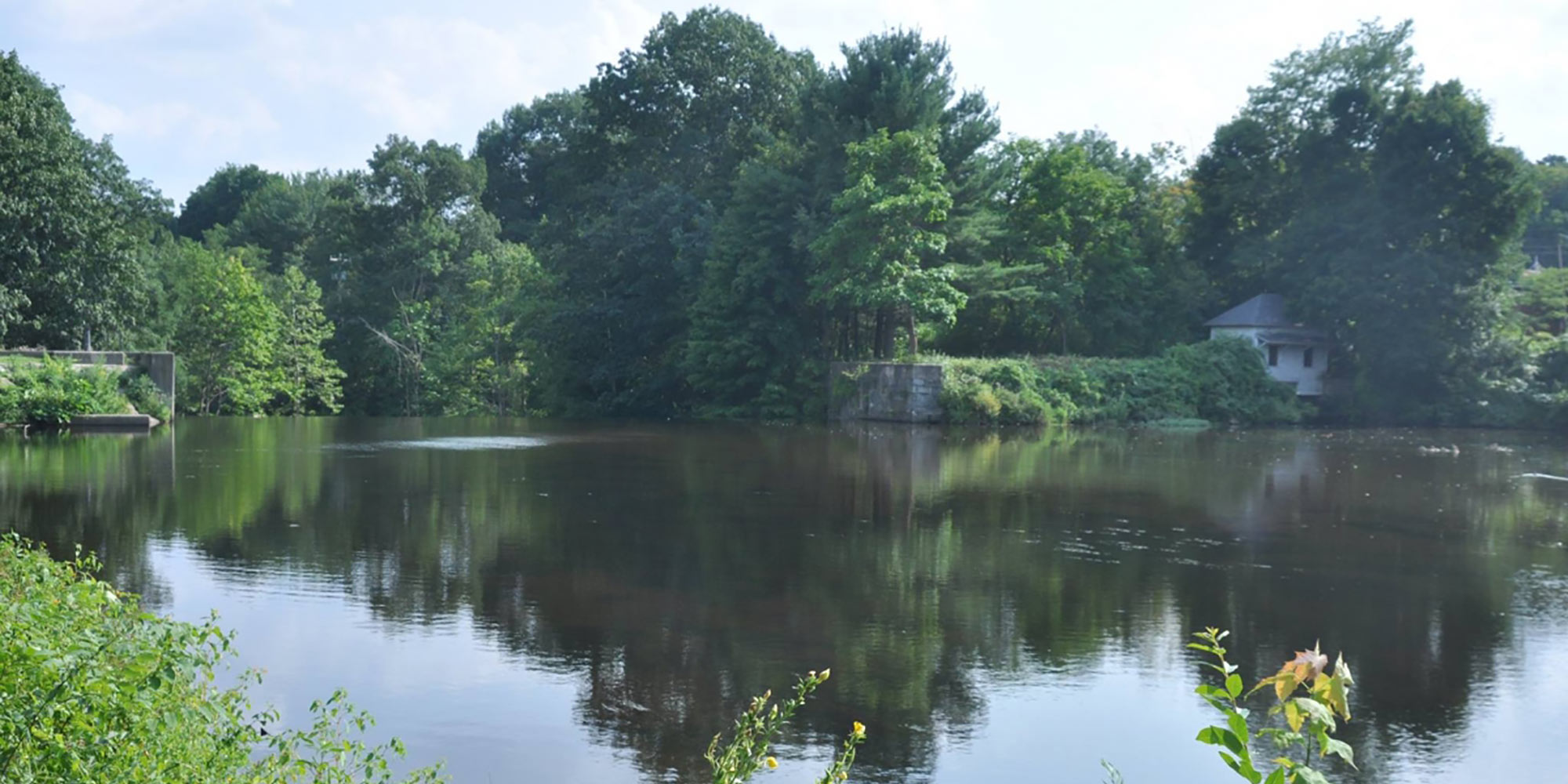 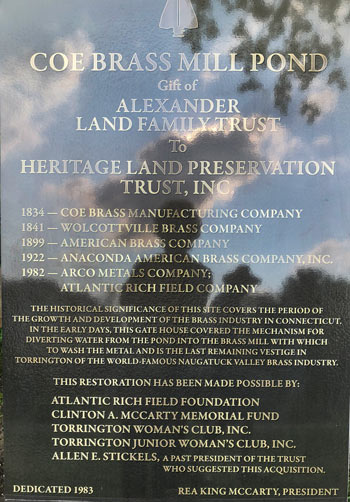 When growing up in the 1920s and 1930s, now almost a century ago, Lem Sperry (Leavenworth P. Sperry, Jr.) particularly loved swimming, fishing, skating, and spending time in a rowboat on a pond his grandfather had created along Straits Turnpike in Middlebury, Connecticut. He also enjoyed hiking on nearby trails and attending family picnics at the log cabin which then existed at the pond.

It is not surprising, therefore, that Lem came to see the importance of keeping land like that where he played as a boy forever open and protected. What is surprising, however, is that Lem’s vision for protection of open space in perpetuity came about before such programs were at all well-known or commonplace—some 50 years ago.

He wanted to give the approximately 150 acres now known as Juniper Hill and Sperry Pond to a local conservation entity, but there was none, so the property was initially given to The Nature Conservancy.

This likely prompted the formation of the Middlebury Land Trust, then known as the Middlebury Conservation Association, in 1969, one of the earliest in Connecticut. That vision is now being celebrated on the occasion of MLT’s 50th Anniversary. It is fitting therefore that CLCC honor Lem with its Katchen Coley Award for Excellence in Land Conservation in this particular year, and the Board of Directors of MLT is proud to place Lem’s name in nomination for this award. 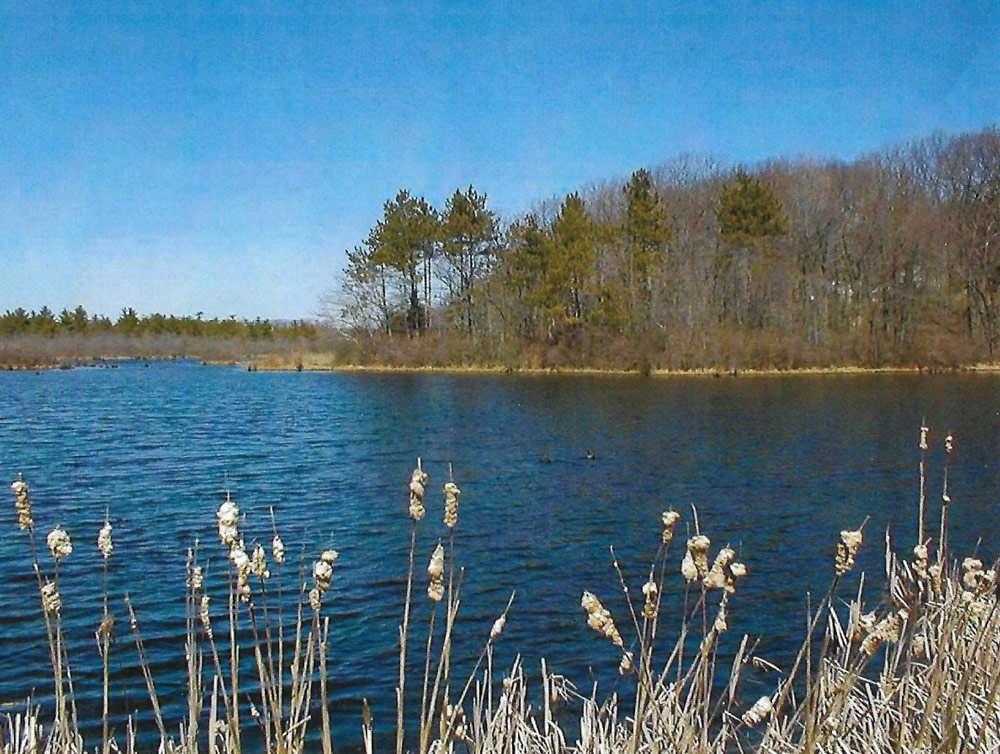 When MLT began, it had only one property, importantly being a fee property—Fenn’s Pond—purchased with funds from residents concerned about one of its most beautiful natural areas being used for a new roadway.  Today, MLT has 62 properties owned in fee or under easement, for a total of 1915 acres of open space preserved in perpetuity. Of this total acreage, Lem has been the benefactor of five properties, making up MLT’s largest assemblage of open space, known as Juniper Hill/Sperry Pond, the very land where Lem played as a boy. One of these properties contains a c. 1900 farmhouse which MLT has recently renovated as its first physical office. The majority of MLT properties were in fact acquired under Lem’s leadership, during his tenure as MLT President from 1985 to 2010. This included the landmark joint purchase by MLT and the Town of the iconic 67-acre farm centerpiece of Middlebury known technically by its historic name of Brookdale Farm but known to all the townspeople as Fenn’s Farm.

Lem, still active as a Director and a member of the Executive Committee of MLT, is an inspiration to all of us coming along behind him. He is a model of getting land transactions to happen, often requiring years of quiet cultivation of donors. As former Board Member and MLT Founding Member, Bob Bean, put it, Lem “has been very earnest and exact with what he’s wanted to accomplish.” Under his leadership MLT increased its Board size and diversity, and at his recommendation the all-volunteer MLT committed to eventual accreditation at the very beginning of that initiative way back around 2006.

Lem was born in Waterbury, attended McTernan School, Taft, St. Paul’s in New Hampshire, Yale (interrupted for two years of service in the Navy during WWII), and Harvard Law School. After three years in Washington, DC, he returned to Connecticut where he served as president and CEO of Waterbury Companies, Inc., for 27 years until his retirement.

19th century Sperry farmhouse being renovated to be the new office for Middlebury Land Trust and entrance to Sperry Pond and Juniper Hill Preserve.

In addition to his service to MLT, Lem served on the board of trustees of the Waterbury Foundation (now Connecticut Community Foundation) for many years and as its president from 1973 to 1974.  He also served on the boards of trustees or advisors of Mattatuck Museum and Historical Society, Riverside Cemetery (an Olmsted landscape), Waterbury Hospital, CT Forest and Park Association, the Yale School of Forestry (now the Yale School of Forestry and Environmental Studies), and a number of other area organizations. Asked why he had done so much for so many, he replied, “You get a lot out of it and meet interesting people.” The reverse is no doubt even truer.

In summary, Leavenworth P. Sperry, Jr., has led a life of community service, most significantly in the land trust, environmental and conservation space, and as he celebrates his 95th birthday and as MLT celebrates its 50th anniversary, both this year, we are honored to place Lem’s name in nomination for the Katchen Coley Award for Excellence in Land Conservation. 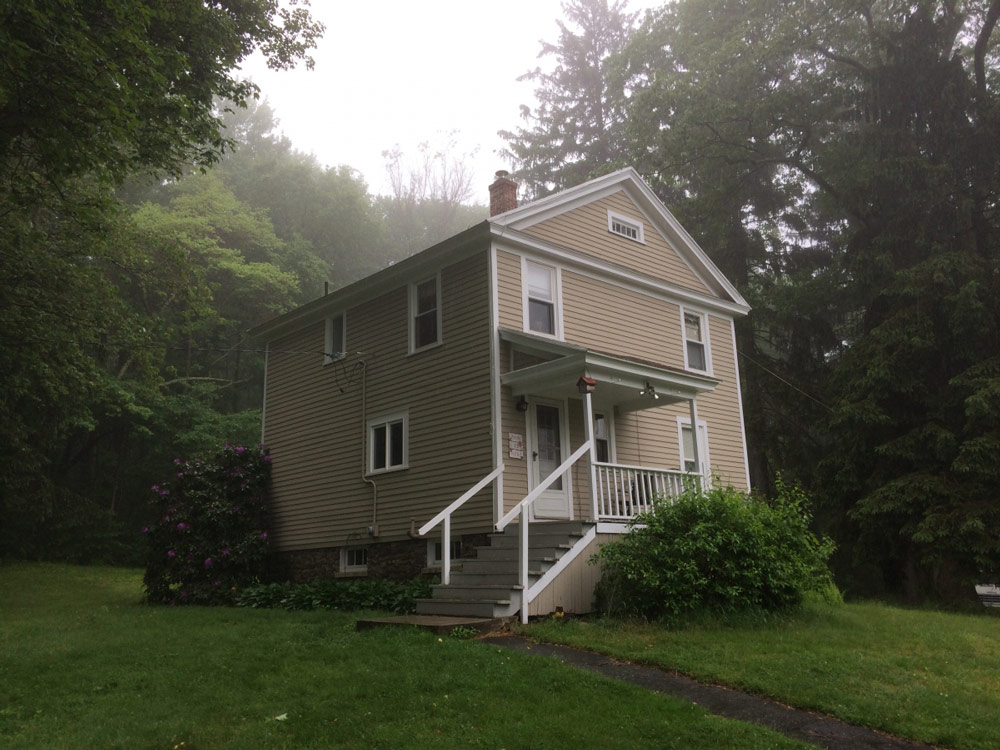