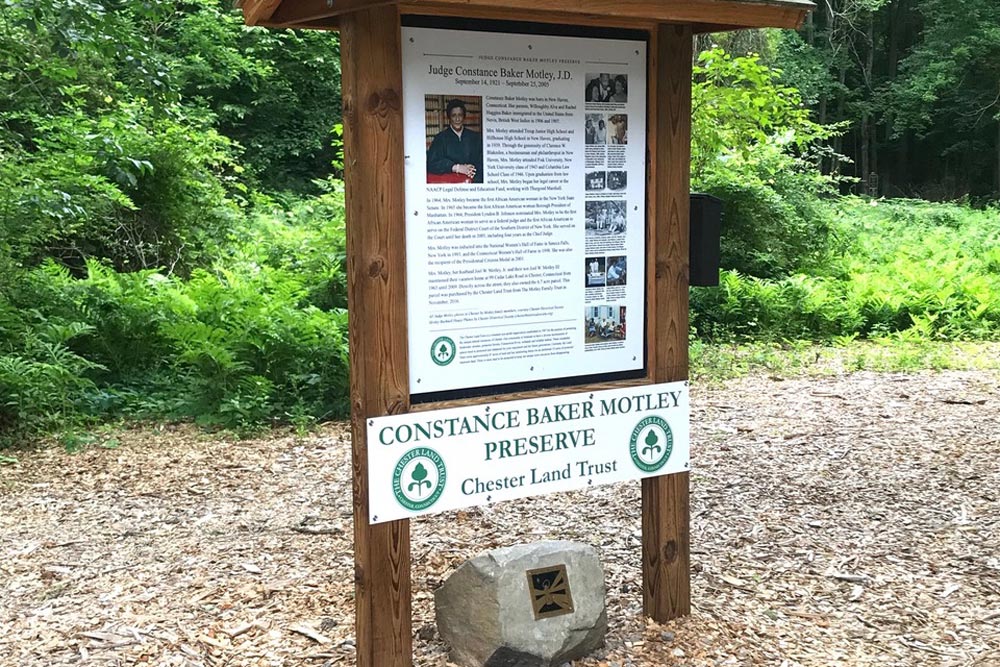 The Chester Land Trust’s Constance Baker Motley Preserve, a Connecticut Heritage Site, is located on the former property of a legendary civil rights leader, and offers the perfect destination for visiting, picnicking, hiking and learning. A recently created trail within the Preserve—”The Little Rock Nine” Loop Trail—commemorating a landmark event in American history—is now open for the public to visit and enjoy.

Constance Baker Motley (1921-2005) was a pioneering and courageous civil rights lawyer for the NAACP Legal Defense Fund who helped dismantle segregation throughout the deep South in the 1950s and 1960s, changing the course of American history. She later became a distinguished federal judge (the first African American woman to be seated on the federal bench) whose landmark decisions shaped American jurisprudence in many areas of American life. During her time on the bench, Motley had a seasonal home in Chester for nearly 40 years (1965 until her death in 2005). More on Constance Baker Motley’s legacy can be found below.

The Constance Baker Motley Preserve, a 7-acre parcel which once included the large Motley family garden, is across the road from her former house. The site was purchased directly from the Motley family in 2016, and after extensive preparation (including creation of a parking area, story-board kiosk and installation of a picnic table) the Preserve was dedicated in May 2017, and opened to the public.

The Chester Land Trust recognized the site’s preservation value both for its association with a key figure in American history, but also for its location bordering the Cockaponset State Forest, and the place it holds amidst a greenway running through the State Forest that has significant regional importance. The Preserve—now part of a large area of undeveloped land—provides important protection for various plants, trees and wildlife.

Connecticut Freedom Trail: In November 2018, the Preserve and Judge Motley’s adjacent home (now privately owned) were chosen by the state of Connecticut as the 140th  “Heritage Site” on the Connecticut Freedom Trail.  Placement on the state’s Freedom Trail is a select designation for sites that celebrate extraordinary African Americans from Connecticut whose efforts expanded freedom and opportunity for all Americans.  (Motley was born and raised in New Haven, the daughter of immigrants from the West Indies).

October 6, 2019 Ceremony: The Chester Land Trust was honored by the state of Connecticut in an official ceremony held to mark the Freedom Trail designation at the Preserve on Oct. 6, 2019. (Owners of the former Motley house were also honored). The event was attended by 125 well-wishers, including representatives of the State Historic Preservation Office (SHPO), state legislators, lawyers, judges, civil rights leaders and the Motley family, along with representatives from other land trusts and the Connecticut Land Conservation Council. A bronze plaque marking the CT Freedom Trail site was formally awarded during the event, which was video-taped by the Chester Historical Society. Watch the ceremony video >>

Freedom Trail Plaque Installed: In June 2020, the plaque for the Preserve was installed under the storyboard kiosk. This occurred after extensive search for the best natural granite stone was conducted by Chester Land Trust president Bill Myers, and discovered in the nearby woods. Local professional stone mason, Dan LaPlace, volunteered his services to transport the big stone, drill it out, and set    the plaque in place with proper holding anchors.

Little Rock Nine Trail Created: During the spring and early summer, CLT President Myers, a former state conservation officer, took on the task of planning and building a scenic hiking trail on the Preserve’s 7-acre site. Investing many months of labor, the ½ mile loop trail he created is considered a “natural terrain trail” which follows the geographic topography of the Preserve. It is a marked trail with a seated overlook at the top, several steep inclines and rocky declines, and has a “moderate to difficult” trail level rating.

When completed in late June 2020, the rugged trail was named the “Little Rock Nine” loop trail, in honor of one of Constance Baker Motley’s most important and influential civil rights cases integrating nine black students at Central High School in Little Rock, Arkansas in 1957. Opened during the 5th month of Connecticut’s quarantine and social distancing, the new trail offered formerly house-bound citizens a great place to enjoy the outdoors.

Location: The Constance Baker Motley Preserve is located at 100 Cedar Lake Road, Chester, CT. Please visit, hike and learn about American history embodied in the life of a courageous and remarkable woman. An informational storyboard kiosk (with take-away brochure), a large picnic table, and the new hiking trail, are there for public enjoyment.

The Chester Land Trust is an all-volunteer, non-profit organization established in 1987 for the purpose of protecting the town’s natural resources, open spaces and unique environment for present and future generations. Currently the Land Trust owns approximately 94 acres of land, and has monitoring duties for an additional 18 acres of protected conservation easement land.  For further info, visit:  www.chesterlandtrust.org

School Desegregation Lawyer: Constance Baker Motley’s fearless legal desegregation work in southern court rooms during the 1950s and 1960s helped change the course of American history. As a chief litigator for the NAACP LDF in the deep south, she enforced the landmark 1954 US Supreme Court decision, Brown vs. Board of Education, that ended racial discrimination in public school education. Her cases included the first major desegregation effort in 1957 of the Little Rock Nine in Arkansas; the famous 1962 admission of James Meredith to the University of Mississippi; and her 1963 effort confronting Gov. George Wallace at the University of Alabama, who unsuccessfully tried to block the doorway to black student admissions. See cases >>

Civil Rights Movement Leader: Atty. Motley was also involved with every major civil rights case of the era. She helped Rosa Parks end the 1955 Montgomery Bus Boycott; worked beside Martin Luther King in his 1961 Albany, GA desegregation effort, and turned the tide for his critical Birmingham Campaign and the Children’s Crusade in 1963. She got John Lewis and the Freedom Riders out of prison, and then desegregated waiting rooms at southern bus stops and whites-only segregated Memphis lunch counters. Finally, she walked beside King in the Selma-to-Montgomery march for voting rights in 1965. Her civil rights legal work over 20 years in the deep south, across 11 states, arguing 200 successful court cases, including ten at the US Supreme Court, was without parallel. Her battles against racism solidified her reputation as one of the most skilled civil rights lawyers of the 20th Century.

African American Trailblazer: Constance Baker Motley was the first woman hired as a lawyer by the NAACP Legal Defense Fund, and the first black woman attorney to step foot inside a southern courtroom; she was the first black woman to be elected to the NY State Senate, as well as Borough President of Manhattan. In 1966, Motley became the first black woman to be a federal judge, appointed by President Lyndon Johnson to the powerful Southern District of New York. She became its Chief Judge in 1982, also a first.  For 38 years, she made landmark rulings for equal access for women, the rights of workers, prisoners and the poor. Her home in Chester, CT coincided with her time as a federal judge (1965-2005). Read her obituary in The Harvard Crimson.  Motley’s retrospective on her in 2020.